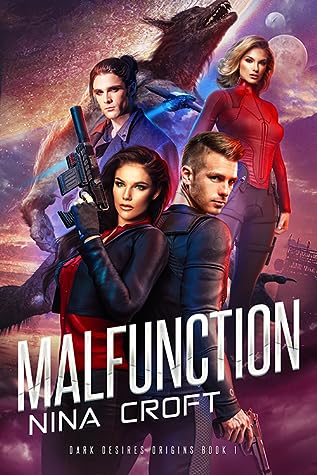 Dark Desires Origins #1, Damn Good Sci-fi Romance! Which I'm not surprised I love her Beyond Human series and with this being the prequel to the Dark Desires series I really need to get all of those and read them. I thoroughly enjoy Nina Croft's writing, her books are immersive they pull you in and don't let go and this one is no different.

The Earth was dying, with twenty-four ships big enough to hold ten thousand people each there was a lottery the winners were the lucky ones, or as they were called "The Chosen Ones" they set off to find a new home. The crews were big enough to man each ship in fifty year rotations and their family got a free pass and an army. But after five hundred years supplies are running short and they still haven't found a new planet and now a "malfunction" is causing cryotubes to fail suffocating the person inside.

Logan Farrell is with the army his current assignment had him with the MPs and that's what they need an investigator, to make sure the failure of the cryotubes was just a malfunction. Well the Captain of the second ship doesn't quite trust the higher ups and wakes up his friend Katia Mendoza a detective with the London Police, or at least she was before they left Earth, to help investigate. Rico the captain of the second ship has his own reasons for putting in his own person on the case, he can't afford everyone to know the truth about his ship. The truth that a good portion of "The Chosen Ones" who were suppose to be on his ship were left behind and replaced by his own people, his own supernatural kind including Katia.

Together Logan and Katia try and find out who is behind the sabotage but with every step closer they get they have a new near death experience that just brings them closer and closer together. The chemistry between them is instant and hot, every spare moment they have is together. But what will Logan think when he finds out not everyone is human?

Overall, I loved this book. The characters, the situation, humor, romance , hot hot (not limited to the bedroom) scenes. I inhaled this book and I want more!