ARC REVIEW Born to be a Cowboy by R.C. Ryan 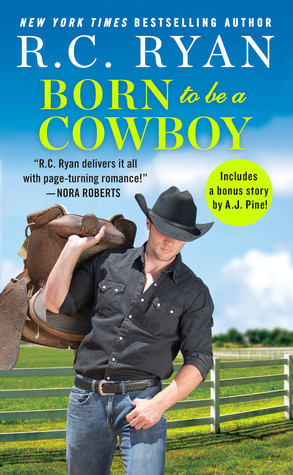 Montana Strong #3, We are back one last time with the Monroes. It can be read as a standalone but I enjoyed the series as a whole. Finn Monroe a small town lawyer part time cowboy wasn't alway lucky to have this family, after the death of both parents the brothers were split up in foster care where they each had a hard time making each of the boys foulmouthed troublemakers. When they ran away they lucked out and found Mac Monroe's ranch. Mac knew how they felt he gave them a home and taught them what it was like to have a loving home environment. It was also the influence of Zachariah that Finn grew up to be a lawyer.

When Jessica walks into Finns office he knows better than to believe what she says right off the back. Her Aunt, the woman who raised her, is missing. The last she heard from her she had ran off and got married and was going on her honeymoon. That isn't like her Aunt at all for as long as she been with her Aunt she's has been married to her ranch. Then when the  PI she hired, a former FBI agent died in an accident right after calling her to tell he he found something she knew her suspicions were right but nobody believed her. Finn wants to believe her something about her story rings true but it isn't until after he does some checking on his own that he fully believes her especially after the motel she was staying at and her rental car catch on fire after talking to Finn. Finn brings her home to the ranch at least there there will be someone with her at all times. But this goes deeper than just Jessica's aunt and Finn stirs up a whole lot of trouble.

I loved the relationship between Fin and Jessica. Finn has a strong work ethic and initially didn't want to get involved with a client but something about Jessica wants him to bend his own rules for once. Jessica feels guilty over what happened to her aunt thinking it never would have happened if she had still been living on the ranch, and now she's willing to risk her own happiness to make sure her aunt is never vulnerable again. Overall, it was a great read. I love R.C. Ryan's attention to detail and her descriptions for me, someone who has never been to Montana, it makes me want to visit all the same time feel like I'm already there while I read it. I love the familial relationship this whole family is wonderful.