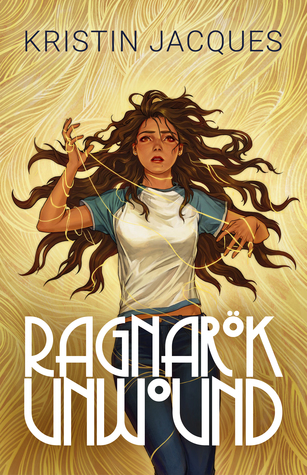 An Urban Fantasy where all the pantheons of Gods exist. Ikepele Ives lives with her best friend and tries to ignore the power flowing under her finger tips. Her mother left her with her father and with no knowledge how to control her power. Until one night she has only once tried to use her powers and it didn't work very well now she has a young Valkyrie asking for her help if not then the end of days for the Norse pantheon is coming. Even though Ragnarok is a prophesied event Hildr, the Valkyrie is telling her otherwise and she needs Ives powers to untangle fate and stop Ragnarok. Together with her best friend Jules she sets off with Hildr to find Loki.

They met his daughter Hel and then Fenrir and Jormungand, who like their father have the ability to shapeshift. With each of them the ties that bind them to Ragnarok get stronger and the more energy she needs that her mortal body can barely contain. By the time she finds Loki, who has escaped from his prison, he is so entwined in Fate's threads she almost kills herself to separate him from Fate's thread. Meanwhile Hel, Fenrir, Jormungand, Hildr, and Jules are fighting off the Frost Giants. Back on Ives home island of Hawaii her father and, unbeknownst to Ives, her Great Aunt the Goddess Pele are fighting off the giants as well.

Overall, it was a fantastic story. I love mythology retold stories and I really enjoyed this version of Loki and his giant children. I love how Pele was thrown in the mix too, as a lover of geology and if I had been smarter I would have gone into volcanology; Pele was the first Hawaiian God I had ever heard of, years ago. I loved all the characters. Ives is a strong female protagonist who is at first trying to avoid her own fate but is thrown into it without warning or a choice. Ives also learns everything her father never told her about her mother. There is a hint of romance for future books but mostly it's character driven and story strong. I love the idea of a Fate Cipher a woman who untangles fate when it gets a little to fubar. I really hope there are going to be more.