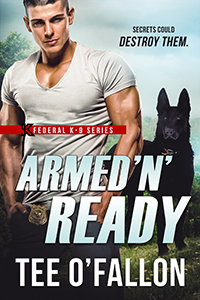 Federal K-9 #2, Missed the first book, but that's okay because this is fine as a standalone. This was a great read, with O'Fallon being in law enforcement herself it came off as very realistic. Nick and Andi try as they might to stay professional and not get involved with each other in the middle of a case. A case where Andi Hardt is suspected of being involved in a money laundering and black market gun distribution. Andi will do whatever it takes to clear her name and unfreeze her bank accounts even if that means pretending to hire the annoyingly sexy Nick Houston as her new bartender.

Mass. State Police Sgt. Nick Houston and his K-9, Saxon, are working in junction with the AFT, IRS, and the FBI to try and track down and stop a black market guns dealer so far they have found the accountant who helps with the money laundering. Unfortunately it's Andi's ex-boyfriend who is still a friend and Andi was staying at his house when they executed the warrant. Nick figures that the guy still has some attachment to Andi so he pitches the idea to stay close to her incase the ex calls her everyone likes the idea so Nick goes to work for her at the Dog Park Cafe.

It took something major to get Andi out of the financial world but when she was betrayed by a person who claimed to love her she found a new love in a dog friendly restaurant, it took all the money she had to open it up and now because of yet another betrayal she might lose this too. Andi can't open her heart again not even to the too sexy for his own good Nick. Nick has been so career oriented since his wife died five years ago he was taken by surprise by how much he likes Andi and by how right it feels being with her. But no matter how much he likes her the job must come first.

Overall, I really liked this book. I loved the characters and the dogs. It's a bit of a slow burn because the try to keep their hands off of each other because of the case, heck for a portion of the book Andi does not like Nick because of what they are doing but her attraction to him wins out the more she gets to know him. Nick is more than what he seems and Andi is a headstrong woman and both have pasts that have molded them into who they are now and keep them hesitant from jumping in to quickly.