ARC REVIEW Watcher in the Woods by Kelley Armstrong 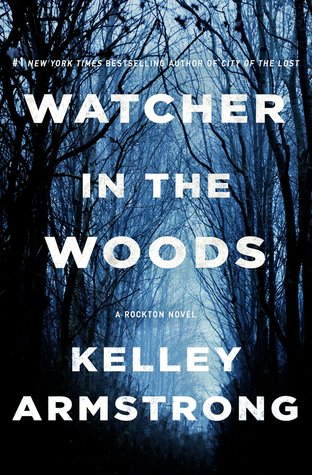 Rockton #4, First off it is wise to read this series in order, this book picks up almost right after the end of the last book and that ended in a way that was teasing about what would happen next. Rockton is a quiet little town in the middle of the frozen Yukon where people go to disappear, if they have enough money. It's a town straight out of the wild frontier days no T.V., no phones, no internet, and regulated electricity. Where there is no money people work on a credit basis, if you help out and do work duty you get credit to buy splurges, and if you don't work you don't eat. Because of the location there are plenty of rules to follow that are in place to keep you alive, break them at your own peril.

Casey and Eric make a quick trip to Vancouver to ask for her sister's help. One of the residents was shot in the back and the placement of the bullet is to close to the spin for either their medic or butcher to attempt. April is a neurosurgeon but she's genius and a brilliant surgeon. Reluctantly April agrees. On the homebound journey though they are followed and before they know it April isn't the only stranger in Rockton. U.S. Marshal Garcia claims he's there for a certain person who is probably more dangerous than they think. But the dickwad doesn't tell them anything and ends up getting shot before Casey and Eric find out who he is there for.

With just about everyone in town having a reason for being there and more than half of them lying about why, Casey has a hard time tracking down the truth and in the process she learns more about supposed friends and their newest resident. Armstrong once again left threads dangling parts of the story that weren't concluded in this book and left it open for the next.

Overall, another outstanding Rockton book. I love Casey and Eric they are so real to me. The whole book just weaves it's magic and transports you there it keeps you on the edge of your seat and if I had my way I would have ignored the world until the book was finished. Told in first person through Casey's perspective which help adds to the mystery of the story.